Network Access Protection (NAP) is a new set of operating system components in Windows Server 2008, Windows Vista, and Windows XP Service Pack 3 that provides a platform for system health validated access to private networks. The NAP platform provides an integrated way of validating the health state of a network client that is attempting to connect to or communicate on a network and limiting the access of the network client until the health policy requirements have been met.

To validate access to a network based on system health, a network infrastructure needs to provide the following areas of functionality:

The NAP platform provides a client and server-side architecture through which policy validation, network access limitation, automatic remediation, and ongoing compliance can occur through additional components supplied by third-party software vendors or Microsoft. 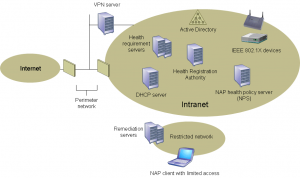 Figure shows the components of a NAP-enabled network infrastructure.

The components of a NAP-enabled network infrastructure consist of the following: 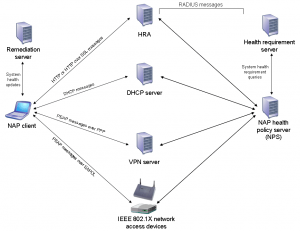 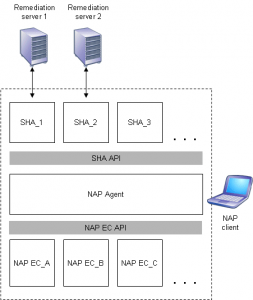 The NAP ECs for the NAP platform supplied in Windows Vista, Windows Server 2008, and Windows XP Service Pack 3 are the following:

An SHA performs system health updates and publishes its status in the form of an SoH to the NAP Agent. The SoH contains information that the NAP health policy server can use to verify that the client computer is in the required state of health. 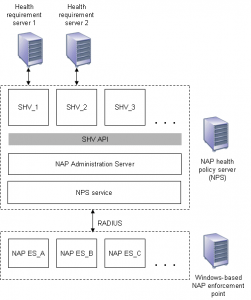 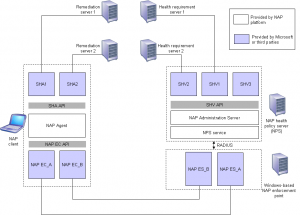 Notice the matching of the following sets of components:

A NAP ES allows some level of network access or communication, can pass a NAP client’s health status to a NAP health policy server for evaluation, and, based on the response, can provide the enforcement of limited network access.

The NAP ESs included with Windows Server 2008 are the following:

The DHCP NAP ES is new functionality in the DHCP Server service that uses industry standard DHCP messages to communicate with the DHCP NAP EC on a NAP client. DHCP enforcement for limited network access is done through DHCP options.

For remote access VPN and 802.1X-authenticated connections, new functionality in the NPS service uses PEAP-TLV messages between NAP clients and the NAP health policy server. VPN enforcement is done through IP packet filters that are applied to the VPN connection. 802.1X enforcement is done at the 802.1X network access device by applying IP packet filters to the connection or by assigning the connection a VLAN ID corresponding to the restricted network.

NPS is the implementation of a RADIUS server and proxy in Windows Server 2008. NPS replaces the Internet Authentication Service (IAS) in Windows Server 2003. For the NAP platform, the NPS service has been updated to include the NAP Administration Server component, support for the SHV API and installable SHVs, and options for configuring health policies.

Based on the SoHRs from the SHVs and the configured health policies, the NPS service creates a System Statement of Health Response (SSoHR), which indicates whether the NAP client is compliant or noncompliant and includes the set of SoHRs from the SHVs.

An SHV receives an SoH from the NAP Administration Server and compares the system health status information in the SoH with the required system health state. For example, if the SoH is from an antivirus SHA and contains the version number of the last virus signature file, the corresponding antivirus SHV can check with the antivirus health requirement server for the latest version number to validate the NAP client’s SoH.

The NAP Agent component can communicate with the NAP Administration Server component through the following process:

The NAP Administration Server can communicate with the NAP Agent through the following process:

An SHA can communicate with its corresponding SHV through the following process:

The SHV can communicate with its corresponding SHA through the following process: 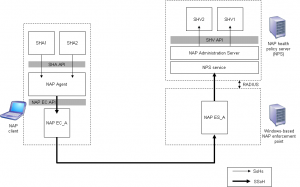 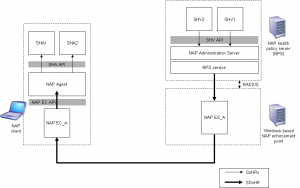 Figure  summarizes the logical networks and the types of initiated communications that are allowed. 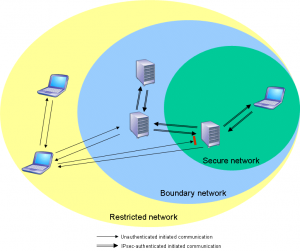 To obtain a health certificate and become a member of the secure network, a NAP client using IPsec enforcement starts up on the network and uses the following process:

The IPsec NAP EC performs steps 3-14 whenever new SoH information arrives at the NAP Agent or when the health certificate is about to expire.

DHCP address configuration limits network access for the DHCP client through its IPv4 routing table. DHCP enforcement sets the DHCP Router option value to 0.0.0.0, so the noncompliant computer does not have a configured default gateway. DHCP enforcement also sets the subnet mask for the allocated IPv4 address to 255.255.255.255, so that there is no route to the attached subnet. To allow the noncompliant computer to access the remediation servers on the restricted network, the DHCP server assigns the Classless Static Routes DHCP option, which contains a set of host routes to the computers on the restricted network, such as the DNS and remediation servers. The end result of DHCP limited network access is a configuration and routing table that allows connectivity only to specific destination addresses corresponding to the restricted network. Therefore, when an application attempts to send to a unicast IPv4 address other than those supplied via the Classless Static Routes option, the TCP/IP protocol returns a routing error.