The Secure Socket Layer (SSL) is a suite of protocols that is a standard way to achieve a good level of security between a web browser and a website. SSL is designed to create a secure channel, or tunnel, between a web browser and the web server, so that any information exchanged is protected within the secured tunnel. SSL provides authentication of clients to server through the use of certificates. Clients present a certificate to the server to prove  their identity.

Security of data in transit over the Internet becomes increasingly necessary because of steadily growing data volume and importance. Nowadays, every user of a public network sends various types of data, from email to credit card details daily, and he would therefore like them to be protected when in transit over a public network. To this end, a practical SSL protocol has been adopted for protection of data in transit that encompasses all network services that use TCP/IP to support typical application tasks of communication between servers and clients.

The SSL protocol was originally developed by Netscape, to ensure security of data transported and routed through HTTP, LDAP or POP3 application layers. SSL is designed to make use of TCP as a communication layer to provide a reliable end-to-end secure and authenticated connection between two points over a network (for example between the service client and the server). Notwithstanding this SSL can be used for protection of data in transit in situations related to any network service, it is used mostly in HTTP server and client applications. Today, almost each available HTTP server can support an SSL session, whilst IE or Netscape Navigator browsers are provided with SSL-enabled client software.

Which problems does SSL target? The main objectives for SSL are:

SSL is in fact not a single protocol but rather a set of protocols that can additionally be further divided in two layers:

The SSL protocol stack is illustrated in Figure1.

The concepts as mentioned above are fundamental for a connection between the client and the server, and they also encompass a series of attributes. Let’s try to give some more details:

The SSL record protocol involves using SSL in a secure manner and with message integrity ensured. To this end it is used by upper layer SSL protocols. The purpose of the SSL record protocol is to take an application message to be transmitted, fragment the data which needs to be sent, encapsulate it with appropriate headers and create an object just called a record, which is encrypted and can be forwarded for sending under the TCP protocol. The first step in the preparation of transmission of the application data consists in its fragmentation i.e. breaking up the data stream to be transmitted into 16Kb (or smaller) data fragments followed by the process of their conversion in a record. These data fragments may be further compressed, although the SSL 3.0 protocol specification includes no compression protocol, thus at present, no data compression is used.
At this moment, creation of the record is started for each data portion by adding a header to it, possible information to complete the required data size and the MAC. The record header that is added to each data portion contains two elementary pieces of information, namely the length of the  record and the length of the data block added to the original data.
In the next step, the record data constructed consists of the following elements:

With the addition of fields, the process of record preparation is completed. Afterwards, the record is sent to the targeted point. The entire process of preparation of the packet to be sent is illustrated in Figure 2 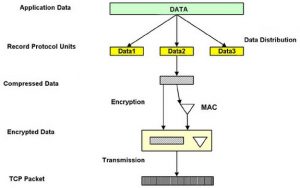 What is the reason for these complicated things associated with an SSL connection? SSL is used  in many services but mostly SSL protects the HTTP communication channel over the Internet and therefore the SSL protocol is seen quite often as associated only with WWW pages. As it has been already mentioned, the SSL protocol can be used to protect the transmission for any TCP/IP service. Apart from the WWW accessing, the second most likely application of this protocol is associated with email sending and receiving.

As for Windows NT/2000/XP applications, SSL is practically used in the system of HTTP and SMTP server services that work in conjunction with IIS. These servers allow an appropriate request  to be generated with the user’s own certificate (employing the Windows 2000 Server certificate services) or by obtaining the certificate from one of  the trusted CAs such as VeriSign (www.verisgn.com) or Thawte (www.thawte.com). For a description of installation of the certificate for a WWW server working in conjunction with IIS browse www.faq.net.pl/article.asp?id=237. In the same manner as for the WWW server it is possible to obtain and install the certificate on an SMTP server supplied along with IIS or available in Exchange 2000. A possible application of the SSL to support other services depends on the possibility of configuration of such a connection by the server.

Figure 4: Establishing the SSL session between the client and the server (red coloured – messages that are non-mandatory).

Table 2: The numbers of ports of some SSL-based services

In 1996 the IETF task force attempted to develop an Internet’s standardised secure method to communicate over the web. They adopted the SSL 3.0 as the starting point and in 1999 released the document RFC 2246 that defined the new Transport Layer Security (TLS) protocol in its version 1.0. The basic goal placed by the task force to be achieved through TLS, was similar to that associated with SSL’s standards, namely to provide security and data integrity features at the transport layer between two web applications. Moreover, some additional features have been added to TSL by the designers:

TLS has been developed as a base used by application layer protocols that are layered on top of the TLS protocol. The specification provided in RFC 2246 does not define, however, how these  top layer protocols should use TLS to protect transmissions. The TLS task force set out to resolve this problem   by the designers of applications and protocols involved. Apart from developing the protocol specification itself, IETF has developed two additional RFC documents: