The world is becoming more interconnected with the advent of the Internet and new networking technology. There is a large amount of personal, commercial, military, and government information on networking infrastructures worldwide. Network security is becoming of great importance because of intellectual property that can be easily acquired through the internet. There are currently two fundamentally different networks, data networks and synchronous network comprised of switches. The internet is considered a data network. Since the current data network consists of computer‐based routers, information can be obtained by special programs, such as “Trojan horses,” planted in the routers. The synchronous network that consists of switches does not buffer data and therefore are not threatened by attackers. That is why security is emphasized in data networks, such as the internet, and other networks that link to the internet.

The vast topic of network security is analyzed by researching the following:

System and network technology is a key technology for a wide variety of applications. Security is crucial to networks and applications. Although, network security is a critical requirement in emerging networks, there is a significant lack of security methods that can be easily implemented.

When developing a secure network, the following need to be considered :

Network intrusions consist of packets that are introduced to cause problems for the following reasons:

Data security is the aspect of security that allows a client’s data to be transformed into unintelligible data for transmission. Even if this unintelligible data is intercepted, a key is needed to decode the message. This method of security is effective to a certain degree. Strong cryptography in the past can be easily broken today. Cryptographic methods have to continue to advance due to the advancement of the hackers as well.

Figure 1: Based on the OSI model, data security and network  security have a different security function . 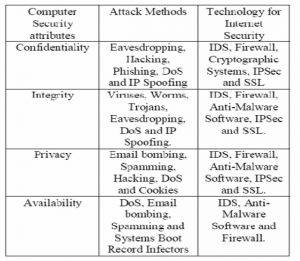