IPSec, the Future of Network Security

Figure  IPsec contains a gateway and a tunnel in order to secure communications.

Internet Protocol security (IPSec) is a framework of open standards for helping to ensure private, secure communications over Internet Protocol (IP) networks through the use of cryptographic security services. IPSec supports network-level data integrity, data confidentiality, data origin authentication, and replay protection. Because IPSec is integrated at the Internet layer (layer 3), it provides security for almost all protocols in the TCP/IP suite, and because IPSec is applied transparently to applications, there is no need to configure separate security for each application that uses TCP/IP.

You can use IPSec to defend against network-based attacks through a combination of host-based IPSec packet filtering and the enforcement of trusted communications.

IPSec is integrated with the Windows Server 2003 operating system and it can use the Active Directory directory service as a trust model. You can use Group Policy to configure Active Directory domains, sites, and organizational units (OUs), and then assign IPSec policies as required to Group Policy objects (GPOs). In this way, IPSec policies can be implemented to meet the security requirements of many different types of organizations.

This section describes the solution that IPSec is intended to provide by providing information about core IPSec scenarios, IPSec dependencies, and related technologies.

The following figure shows an Active Directory-based IPSec policy being distributed to two IPSec peers and IPSec-protected communications being established between those two peers. 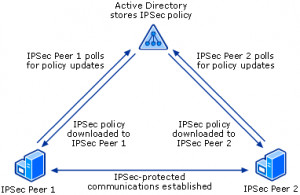 The MicrosoftWindows implementation of IPSec is based on standards developed by the Internet Engineering Task Force (IETF) IPSec working group. For a list of relevant IPSec RFCs, see the “Related Information” section later in this subject.

IPSec is recommended for the following scenarios:

As illustrated in this figure: 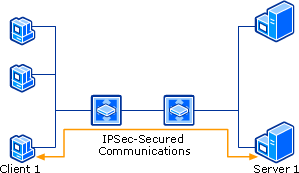 Figure : Securing Communications Between a Client and a Server by Using IPSec

The following figure shows domain controllers in two forests that are deployed on opposite sides of a firewall. 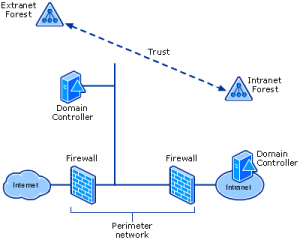 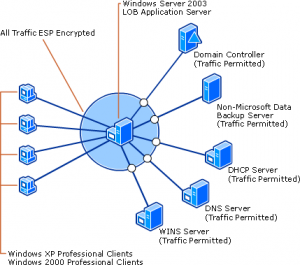 In this scenario, an application server in an internal corporate network must communicate with clients running Windows 2000 or Windows XP Professional; a Windows Internet Name Service (WINS) server, Domain Name System (DNS) server, and Dynamic Host Configuration Protocol (DHCP) server; Active Directory domain controllers; and a non-Microsoft data backup server. The users on the client computers are company employees who access the application server to view their personal payroll information and performance review scores. Because the traffic between the clients and the application server involves highly sensitive data, and because the server should only communicate with other domain members, the network administrator uses an IPSec policy that requires ESP encryption and communication only with trusted computers in the Active Directory domain.

A common requirement for organizations is to secure communications between remote access clients and the corporate network across the Internet. Such a client might be a sales consultant who spends most of the time traveling, or an employee working from a home office. In the following figure, the remote gateway is a server that provides edge security for the corporate intranet. The remote client represents a roaming user who requires regular access to network resources and information. An ISP is used as an example to demonstrate the path of communication when the client uses an ISP to access the Internet. L2TP/IPSec provides a simple, efficient way to build a VPN tunnel and help protect the data across the Internet.

For interoperability with gateways or end systems that do not support L2TP/IPSec or Point-to-Point Tunneling Protocol (PPTP) VPN site-to-site connections, you can use IPSec in tunnel mode. When IPSec tunnel mode is used, the sending gateway encapsulates the entire IP datagram by creating a new IP packet that is then protected by one of the IPSec protocols. The following figure illustrates site-to-site IPSec tunneling. 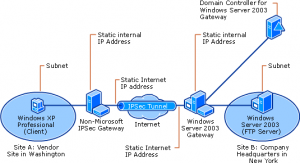 4. Securing Communication Between Domain Members and their Domain Controllers

Using IPSec to help secure traffic between domain members (either clients or servers) and their domain controllers is not recommended because:

5. Securing All Traffic in a Network

In addition to reduced network performance, using IPSec to help secure all traffic in a network is not recommended because:

The following scenarios merit special consideration, because they introduce an additional level of complexity for IPSec policy configuration and management:

You can use IPSec transport mode to protect traffic sent over 802.11 wireless networks. However, IPSec is not the recommended solution for providing security for corporate 802.11 wireless LAN networks. Instead, it is recommended that you use either 802.11 Wired Equivalent Privacy (WEP) encryption or Wi-Fi Protected Access (WPA) and IEEE 802.1X authentication.

IPSec is not recommended for end users in general home networking scenarios for the following reasons:

9. Securing Traffic in Environments That Use Dynamic IP Addresses

If you do use Active Directory-based IPSec policies, IPSec policy design and management must take into account the delays that result from the replication of Group Policy data from domain controllers to domain members. Often, the first step in troubleshooting a problem with IPSec connectivity is to determine whether the computer in question has the most current Group Policy assignment. To do this, you must be a member of the local Administrators group on the computer for which troubleshooting is being performed.